We are SNAP, the Survivors Network of those Abused by Priests. We are the largest, oldest and most active support group for women and men wounded by religious authority figures (priests, ministers, bishops, deacons, nuns and others).

Catholic High School coach accused of child sexual abuse, SNAP commends the victim for coming forward and urges all dioceses to include lay perpetrators on their lists

We applaud the courageous woman who has filed the lawsuit in this case alleging repeated sexual assaults at the hands of a former water polo coach at Mother McAuley Liberal Arts High School. The survivor has named the coach, the school, and the Archbishop of Chicago as defendants. We believe that the United States Conference of Catholic Bishops should mandate that all of those accused of abuse in Church institutions - whether clergy or lay - should be included on the diocesan lists.

The complaint alleges that the abuse occurred while the victim was a student at McAuley between 2012-2016. She was only 13 when she first met the coach. False accusations of child sexual abuse are extremely rare, so we believe this woman. Since the allegations are recent, we hope that local law enforcement will open their own investigation, subpoena or seize school and Archdiocesan records, and urge anyone who experienced, witnessed, or suspected the coach of abuse to come forward.

Two Virginia school administrators are facing charges after choosing not to report to police allegations of sexual abuse that had been levied against their school's volleyball coach. We applaud the filing of these charges and are grateful that police and prosecutors are sending a message to others who might ignore or conceal allegations of child sex crimes.

According to the New York state electronic filing system, a lawsuit was filed in October of 2019 by Victor Petit-Phare against the Catholic Diocese of Brooklyn and Queens, St. Jerome’s School and Church, and Bishop Guy A. Sansaricq. The complaint accused Bishop Sansaricq of child sexual abuse while he was a priest at St. Jerome’s in the early 1990s.  As best we can tell, the Diocese never uttered a single word about the allegations against the Bishop.

We know that false allegations of child sexual abuse are extremely rare, and we stand with Victor. It is wrong for Catholic officials, who the whole world now knows have shielded abusive clerics in the past, to withhold information that would help other victims to find the courage to come forward rather than to sit alone and in the silence.  Child sex abuse accusations should be made public as quickly and broadly as possible. Otherwise, perpetrators are given the chance to rally support, intimidate survivors, abuse others, threaten witnesses, discredit whistleblowers, destroy evidence, fabricate alibis, and even to flee the country.

The United Methodist Church finally notifies its members about an abusive minister; SNAP says the action is too little too late

On August 18, Bishop LaTrelle Easterling of the United Methodist Church shared with parishioners in the denomination’s Baltimore-Washington Conference that Rev. Mark Schaefer had his clergy credentials removed following allegations of "clergy sexual misconduct." To us, this notification definitely falls under the category of far too little, way too late.

In her email, the Bishop acknowledged that in 2019 she received an allegation against Rev. Schaefer, a campus minister and university chaplain at American University in Washington, DC, at the time. The Reverend appears to have admitted that he groomed and sexually abused a University student, since the denomination required him to disclose his misconduct to American University, undergo six months of psychological assessment and counseling, and complete three years of probation. However, Fr. Schaeffer retained his clergy credentials, with the understanding that any additional violations "could" result in surrendering his credentials. The following year, two more American students came forward to file formal complaints, and Rev. Schaefer, admitting the allegations, at last surrendered his license.

Pope Francis accepted the resignation of Bishop Tomé Ferreira da Silva, who oversaw a diocese in Sao Paulo state, less than a week after a sexually explicit video, purported to be the bishop, hit social media outlets. Fifteen years shy of the normal retirement age for bishops, Bishop Ferreira da Silva has reportedly been under investigation by the Catholic Church since 2015. The bishop is said to have ignored reports of abuse and exchanged sexual messages with an adolescent, as well as taking a large amount of money from the Church and giving it to someone with whom he allegedly had a romantic relationship.

CHILD USA, in partnership with SNAP, has developed Survivor Toolkits

Toolkits to help survivors understand their rights and guide them through the empowering but challenging process of filing a civil lawsuit. 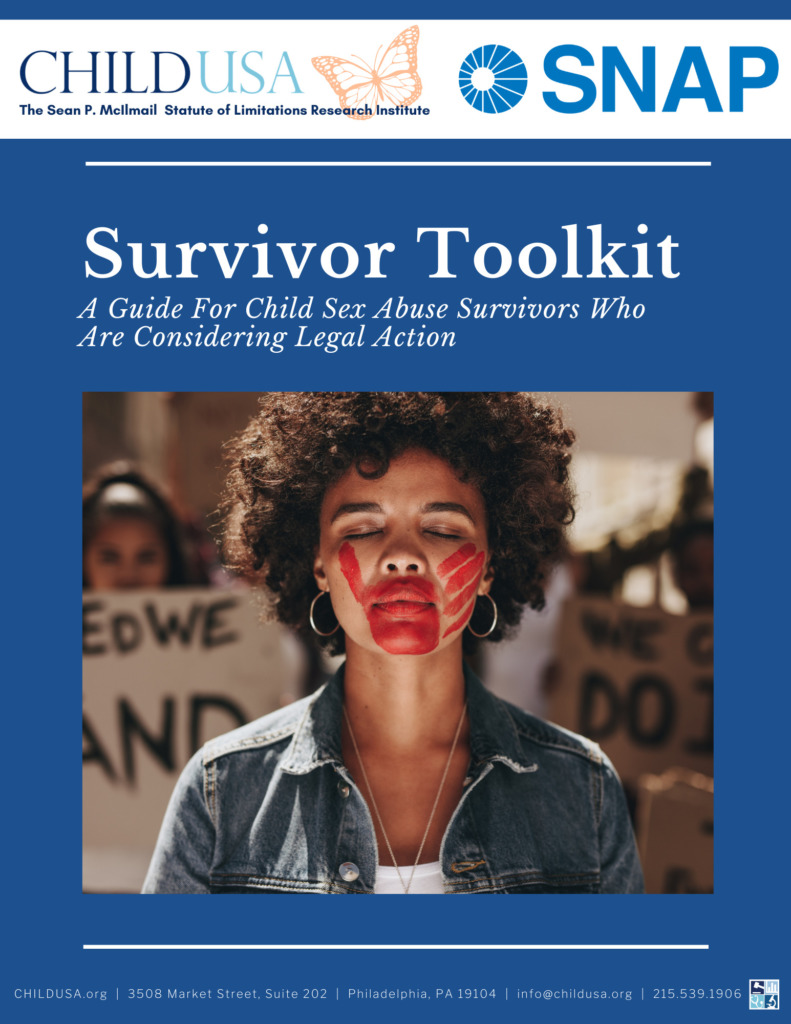 Just Sued Priest Still on the Job in Detroit

A priest who is currently listed as a professor at a Detroit seminary was sued last week for alleged child sex crimes. For the safety of children, we call on Michigan church officials to immediately suspend the cleric.

Following the release of the bombshell Pennsylvania grand jury report in 2018, 22 states opened their own independent investigations into the abuse of Catholic children by clergy. As more information about the true scope of the problem has been uncovered over the past three years by those probes and by civil windows, we urge the remaining states to open probes of their own. We are confident that the scope and scale of investigations nationwide into cases of abuse by the clergy, nuns, brothers, lay employees, and volunteers will yield hundreds, if not thousands, of new victims coming forward and will reveal the names of countless "hidden predators."

A former Michigan Catholic priest is arrested for solicitation of minors; SNAP reacts

Aaron Nowicki, a former priest from the Catholic Diocese of Marquette who was removed from ministry in 2019, has been arrested in a sting operation for allegedly attempting to meet children for sex. We are grateful for this arrest, and we hope this will encourage others who may have been harmed by Nowicki or anyone else in the Diocese to come forward and make a report to law enforcement.

More than 900 child sex abuse claims were filed against the Diocese of Buffalo; SNAP does the math.

Over 900 claims of child sexual abuse have been filed against the Diocese of Buffalo, a number that is reported to be the largest number of claims ever filed against a single Catholic diocese in bankruptcy. These staggering numbers will surely rock the public.

The sheer number of claims reported is mind-boggling. However, we believe this will become a common theme across the country as ‘windows to justice’ continue to be passed by state legislatures. Sadly, given what we have seen over the course of our history, we are not surprised at the numbers, nor are we surprised at the content and description of these claims.