Welcome to the 2021 Annual SNAP Conference Hosted Online with Showcare 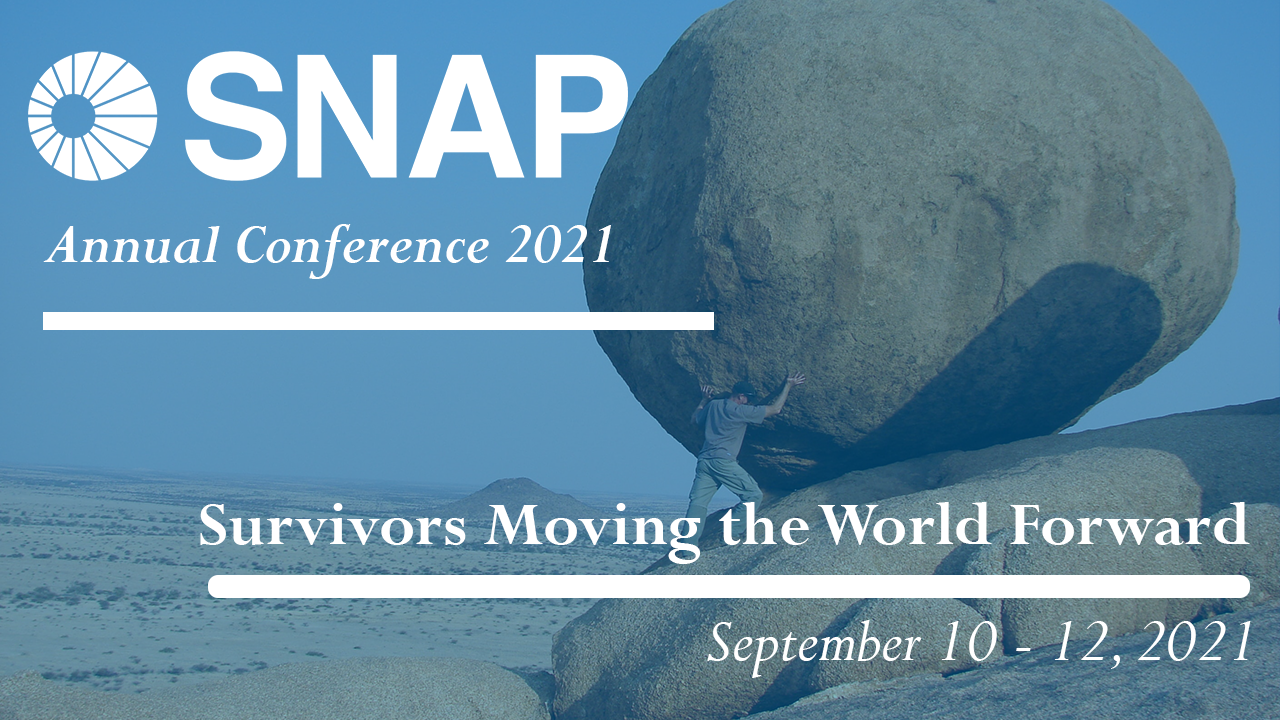 Please RSVP here to let us know that you are coming and to receive the most up-to-date information on the conference as soon as it's made available.

Just like last year, we'll be using the professional Showcare platform so you'll be able to access all of the conference content from one convenient location. We've got some amazing speakers on deck including psychiatrist Dr. James Jones, international advocate and survivor Doris Reisinger, and of course our longtime friends Tom Doyle and Bishop Accountability. Below is the full schedule at a glance:

2021 Virtual Conference - Schedule at a Glance

2021 Virtual Conference - Schedule at a Glance

Doris Reisinger (née Wagner) grew up in Germany in a family of nine. In 2003, at age 19, she became a Sister in a community called The Spiritual Family The Work and lived in Rome, Oxford and Bregenz (Austria). After leaving that community in 2011, she described her experiences of spiritual and sexual abuse in her memoir „Nicht mehr ich“ (No longer I). She studied theology, and completed a PhD in philosophy. At present, she is an Assistant Professor at the Goethe University in Frankfurt am Main. As an activist and a scholar she is dedicated to clergy sex abuse of nuns and adults as well as spiritual abuse. She is a fellow of Notre Dame’s Gender Sex and Power project and has been awarded the Christine Schenk Award for Young Catholic leaders in 2020.

Dr. James Jones was born in Newark NJ, but was raised in Philadelphia, PA. He received his Associates Degree from the Community College of Philadelphia, his Bachelor’s Degree from Saint Joseph’s University. He received his Doctorate of Medicine degree from Temple University School of Medicine. He received his training in Psychiatry at Temple University Hospital. Dr. Jones is the author of the book I’m Alright which documents his transformation from a victim to a survivor of childhood abuse. In his book, he shares his journey in a transparent fashion. He encourages all childhood abuse survivors to step out of the shadow of shame and guilt and stand in their truth.

Anne Barrett Doyle and Terry McKiernan run the website Bishop-Accountability.org, an incalculable resource for survivors, advocates and allies who are interested in learning about the clergy sexual abuse crisis. Bishop-Accountability.org is a digital collection of documents, survivor witness, investigative reports, and media coverage, made public to all and free of charge. Anne and Terry are constantly researching new aspects of the crisis and are key partners for in the fight for justice, prevention, and accountability.

Sally Zakhari is a survivor of clergy abuse and the founder of the Coptic Survivor Movement. Sally is a leader in fighting for the rights of survivors and has helped blaze a trail for other survivors from the Coptic church as well as provided an example of the power that social media can have to force change.

Jeff Herman is a nationally-recognized trial lawyer and advocate for survivors of rape, sexual abuse and sexual exploitation. Over his career he has represented one thousand brave men, women and children. Over the past two decades, Jeff has built a national practice and has become one of the nation’s leading childhood sexual abuse lawyers and pioneers, a true champion of his clients’ rights. Jeff is the founding and managing partner of Herman Law.

Mary Dispenza is a survivor of priest and nun abuse. She cherishes the opportunity to connect with survivors as a SNAP leader for those abused by nuns and clergy. Mary is a member of the LGBTQIA Advisory Board to the Bellevue, WA, Police Department. She is a writer, speaker, and author of the award winning, Split: A Child, A Priest, and the Catholic Church. Mary believes that the arts are a pathway to healing and understanding. Mary says, “When words failed me, art stepped in and became my voice.”

Tom Stewart is a survivor of childhood sexual abuse in the Boy Scouts. Raised by an overbearing mother and absent father, it set the stage for evil to hone in on a little boy's void. The evil was disguised as his Scout leader whose abuse stole Tom's childhood. It took Tom until he was forty to break his silence. Together with his brother, their landmark case against the Boy Scouts prevailed, and revealed what the organization already knew, but fought so hard to keep secret

Jay Taylor moved to Chicago in 2005 after graduating from Kalamazoo College, and soon began taking classes at DePaul University which culminated in 2008 with a Masters of Education.  Soon thereafter Jay took a job at Carlos Fuentes Elementary as the schools’ sole Special Education teacher and Case Manager. In early 2018 he attended a workshop and was inspired to purchase a gong and then crystal bowls and in June of 2018 Jay left his teaching position of 10 years to move into sound full time.  There is no replacement for experience which is why Jay has found every opportunity to share his sounds.  In the past year Jay has donated over 140 sound experiences to non-profits, hospitals, and treatment centers.  He has also been paid to facilitate over 170 sound experiences for private clients, corporate offices, yoga studios, weddings, and other events.

Dr. Chris Longhurst is an academic researcher, survivor, and the national leader of SNAP Aotearoa – New Zealand. Chris has been a SNAP leader since 2018 and has established a national support group infrastructure in New Zealand and is a key member of the Royal Commission of Inquiry into Faith Based Care, a national investigation into systemic cases of abuse and cover-up committed by institutions in New Zealand.

Tom Doyle has worked to expose clergy sexual abuse in the Catholic Church since 1984. He has testified as an expert witness and written and lectured on the subject. Ordained in 1970, Tom worked as a parish priest, church administrator and teacher, and spent 19 years as a USAF chaplain. Tom holds a doctorate in Canon Law and a Master’s degree in philosophy, theology, church administration, Canon Law and political science.

Note: for this year's event, we are utilizing a "pay what you can" model. These conferences are expensive to put together, but we also recognize that the pandemic may have made a dent in folks' income. If you're interested in attending this year's conference, we hope you'll purchase a ticket at whichever level you are most able to make work for you. If you have any questions, please contact us.