The Roman Catholic Diocese of Albany’s effort to keep secret the psychological treatment records of suspected pedophile priests was rejected Thursday by a state appellate court in a ruling that could affect thousands of Child Victims Act cases in New York.

The appellate panel also upheld state Supreme Court Justice L. Michael Mackey’s decision ordering the diocese to turn over the personnel records of at least 48 priests whom the church determined had been credibly accused of child sexual abuse over a period stretching from 1946 to 1999.

April 19, 2022
Joshua Bote, SFGATE
April 19, 2022Updated: April 19, 2022 12:22 p.m.
A defrocked Bay Area Catholic priest convicted of child molestation and accused by multiple families of sexual abuse and assault during his decades-long tenure has now been arrested for allegedly killing a man while driving drunk in a gated community.
Stephen Kiesle, the 75-year-old who was at the center of an Associated Press exposé on Pope Benedict, was arrested Sunday morning on suspicion of gross vehicular manslaughter and driving under the influence, Walnut Creek police told Rossmoor.com.

The crash took place at around 9:15 p.m. in the “active adults 55+” gated community of Rossmoor, Rossmoor.com reported, when Curtis and Laurelyn Gunn were walking home from an event at the nearby Gateway Complex. While approaching an intersection, a car going above the 25 mph speed limit hit the Gunns while driving on the curb, striking Curtis head-on and scraping Laurelynn. Curtis Gunn was pronounced dead at the scene, the news site said.

Kiesle was arrested about an hour later, according to Contra Costa County records.

In a bid to keep parishes and officials, including Bishop Salvatore Matano, from answering scores of sexual-abuse allegations against church officials in state court, the Roman Catholic Diocese of Rochester has asked for a Bankruptcy Court trial.

Known as adversarial proceedings or APs for short, such trials look to have a bankruptcy judge resolve differences between parties in a case. Parties not satisfied with a bankruptcy judge’s ruling can appeal the ruling to a federal district court.

As the Rochester Beacon previously reported, the expiration of a Bankruptcy Court stipulation putting the state court sexual-abuse claims against the church on hold came after one of the two parties who struck an agreement some two years ago to halt the state court cases declined to renew the pact.

The church needs to name and confront 'clerical fragility'

The first, a symposium titled "Gender, Sex, and Power: Towards a History of Clergy Sex Abuse in the U.S. Catholic Church," was hosted March 27-29 by the Cushwa Center for the Study of American Catholicism at the University of Notre Dame.

The second, a conference titled "'Our transgressions before you are many, and our sins testify against us' (Is 59:12a): Re-Imagining Church in Light of Colonization and Catholic Sexual Abuse," took place at Gonzaga University March 31-April 3.

Although I was out of town and could not attend the Notre Dame event, I was an invited participant in the Gonzaga conference, which was sponsored in part by the "Taking Responsibility" project based at Fordham University. The primary working group consisted of approximately 40 scholars from across North America, mostly historians and theologians (including some who had presented at or attended the Notre Dame symposium just a few days earlier). While there were two plenary sessions open to the public, most of these working sessions were closed to the invited participants.

Former Albany Bishop Howard Hubbard was questioned last April by attorneys representing people who claim they were sexually abused by priests in the Albany Diocese. The deposition that Hubbard gave under oath was made public on Friday.

A December complaint sent through the U.S. bishops’ abuse reporting system alleges that a now-retired Brooklyn auxiliary bishop put minors at risk, by enabling a priest to be in contact with teenage girls despite allegations of grooming behavior.

Bishop Raymond Chappetto retired last month as auxiliary bishop and vicar general in the Brooklyn diocese. He is now the subject of a Vatican-ordered investigation under the terms of Vos estis lux mundi, the 2019 policy promulgated by Pope Francis on investigating abuse or administrative misconduct allegations against bishops.

District Court of Guam Chief Judge Frances Tydingco-Gatewood ruled on Saturday that funds from the Archdiocese of Agaña’s Catholic parishes and schools could be used to help pay survivors of sexual abuse.

In January 2019, the Archdiocese filed for Chapter 11 reorganization bankruptcy to allow it to restructure its finances to pay the plaintiffs in about 202 clergy sex abuse claims.

The church listed $22.96 million in assets, with $45.66 million in liabilities, according to PDN news files.

Attorney Edwin Caldie, who represented some of the survivors and other creditors, said that the parties currently are trying to agree on a settlement between what the claimants are asking and what the church can pay without losing its entire community.

“It’s complicated. The church chose to file for bankruptcy and so the bankruptcy code, all of the laws, federal laws, relating to bankruptcy, they’ll guide and they’ll help us figure out what that is,” Caldie said.

Additionally, because the claims against the church are higher than it can pay, those involved have to figure out how to balance what the church can pay through bankruptcy, while ensuring as much as possible is paid to all victims.

According to Caldie, both the Archdiocese and the committee of survivors have proposed plans for reorganization.

Although Caldie believes that the committee’s plan is feasible, the church disagrees.

“That’s going to be the starting point for our discussions now, with our mediator, to see if we can figure out common ground to settle.”

Although the ruling wasn’t in the Archdiocese’s favor, Archbishop of Agaña Michael J. Byrnes said they will work with the creditor’s committee to compensate victims and survivors while still supporting their ministries, schools and parishes.

“We were all inspired by the extraordinary courage of Mr. (Leo) Tudela and his heartfelt call for everyone to work together for the good of those who have suffered excruciatingly from clergy sexual abuse in our Church, “ Byrnes said in a news release. “On behalf of the entire Catholic Church on Guam, I sincerely apologize for the grave harm members of the Church inflicted on you in past years. I pray for each of you every day. Our entire Archdiocese prays for you at all our Masses.”

Leo Tedula, now 78, was among 5 survivors to publicly accuse the Guam clergy of sexual assault back in May 2016.

He told senators in 2016 that he was sexually abused on three separate occasions by three people, including a priest, Father Louis Brouillard, connected to the Archdiocese of Agaña when he came to Guam in 1956, according to PDN files.

Tudela was among four people who testified at an August 2016 legislative public hearing on Sen. Frank Blas Jr.’s measure that eventually became the public law that lifted the time restriction on lawsuits for victims of child abuse.

At the time, criminal prosecution was impossible in most cases because of the statutes of limitations that were in effect.

The deadline to prosecute offenders expired decades prior, but Guam law has since changed to eliminate time limits on prosecuting future offenders.

All sex abuse survivors deserve a day in court

Over the course of almost five decades and across two countries, the man who abused me and countless others — track coach and former Olympian Conrad Mainwaring — used his Olympic status to gain access to young male athletes in order to manipulate and abuse them. During Mainwaring’s time working at Syracuse University in the early 1980s, he abused me and many others under the deception of coaching and mentorship.

Because of New York State’s Child Victims Act (CVA), which was signed into law three years ago this month, I had legal recourse — but most of my fellow survivors do not.

I was a high school student at the time the abuse started and under the age of 18, which meant I was eligible to file a civil lawsuit thanks to the CVA’s lookback window. Most survivors of Mainwaring’s abuse were in college and 18 or older. Now, many years later, with the statute of limitations long passed, survivors who were adults are barred from any chance to pursue justice and have no recourse. That’s why I am fighting for passage of the Adult Survivors Act (ASA).

Before the CVA lookback window closed last August, thousands of survivors across the state filed cases against their abusers. These included Virginia Giuffre, who just settled her claim against Prince Andrew. The ASA would do the same exact thing, giving survivors who were over the age of 18 at the time of their abuse one year to go to civil court to sue their abuser — or the institutions that covered up or enabled the abuse — no matter how long ago the abuse occurred.

Baruch Leifer, 70, was arrested last month but his name barred from publication; suspected of molesting a family member when she was 12; more accusations said too old to prosecute

Baruch Leifer was named Monday as the Jerusalem rabbi who was arrested last month on suspicion of molesting children several years ago.

A gag order barring publication of Leifer’s name was lifted Monday at the request of the Kan public broadcaster.

Leifer’s daughter-in-law Malka Leifer is currently awaiting trial in Australia on suspicion of dozens of incidents of molesting students when she was a school principal in Melbourne.

Baruch Leifer, a senior rabbi in the Khust Hasidic dynasty, is suspected of multiple indecent acts against a family member when she was 12 years old, according to Kan.

Additional complaints have been lodged against him, but in those, the alleged acts occurred too long ago to be prosecuted, the report said.

Get The Times of Israel's Daily Editionby email and never miss our top stories
Newsletter email addressGET IT
By signing up, you agree to the terms 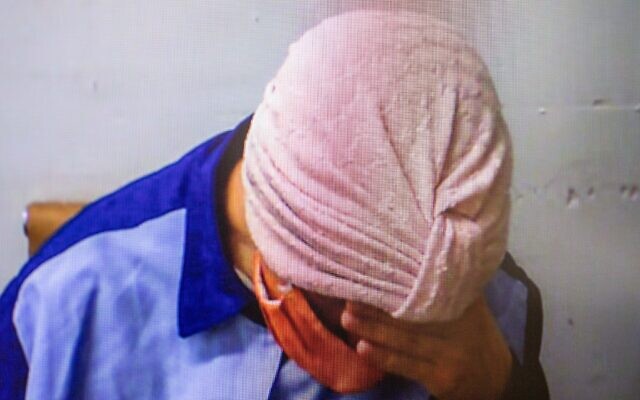 Malka Leifer, a teacher wanted in Australia for child sex abuse, seen on a screen via a video link during a court hearing at the Jerusalem District Court on July 20, 2020. (Yonatan Sindel/Flash90)

In September, a Melbourne court ruled that Malka Leifer must stand trial on 70 charges of child sex abuse at a Jewish ultra-Orthodox school where she worked.

Malka Leifer, an Israeli citizen who was extradited to Australia in January 2021, denies dozens of charges, including rape, indecent assault and child sexual abuse. The crimes allegedly took place between 2004 and 2008.

Leifer, 55, had fled Australia for Israel after the allegations against her surfaced in 2008, moving with her family to the Emmanuel settlement in the West Bank. Australian authorities pressed charges in 2012 and requested her extradition two years later.

In December last year, prominent children’s author and rabbi Chaim Walder died by suicide after the Haaretz newspaper published a story accusing him of sexually assaulting nearly two dozen people, including children — allegations he had denied.

The Walder story has been hailed as a potential turning point in the approach to sexual abuse cases within the very insular community.

Then in January, news broke that Dudi Shwamenfeld, a popular Haredi radio host, was accused by multiple women of sexual abuse, including one who said she was 16 when the abuse began.