The scarf’s colors, she said, were chosen to honor the memory of Ashlynne Mike, an 11-year-old Diné girl who was sexually assaulted and murdered near Shiprock, New Mexico, in 2016.

Agents from the FBI office in Salt Lake City traveled to southern San Juan County to award Utah Navajo Health System (UNHS) for its victim advocacy program, which Crotty and others hope will become a model program for supporting victims of sexual assault and domestic violence across the Navajo Nation. But amid the pageantry and congratulations, Crotty reminded the federal and tribal law enforcement officials who were present about the stakes of the issue.

“This is very hard work,” she said. “It has a stigma to it. Nobody wants to talk about it.” But facing the issues head-on opens the space for dealing with the root causes and healing, she said. 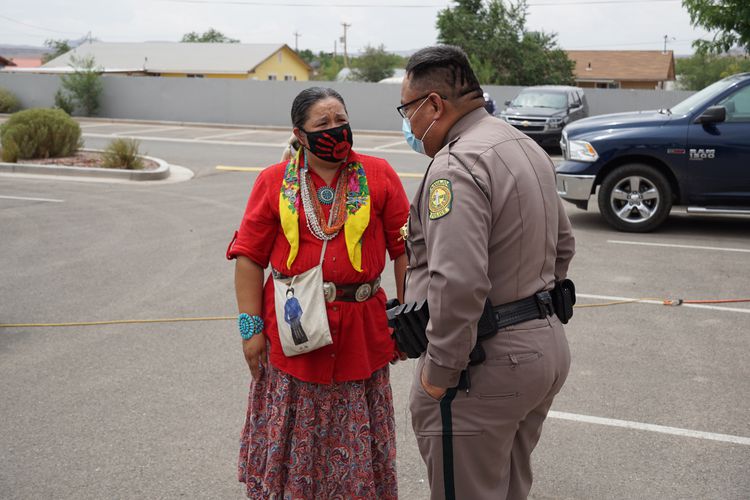 “In 2016, when we lost Ashlynne,” Crotty continued, “we as a community remember how vulnerable we felt as mothers and fathers, knowing that our children should be safe here in the communities that they love, the community where they were raised. We started taking a coordinated effort and looking, ‘How can we help? How did this happen? How can we prevent it?’”

Crotty helped convince Congress to pass legislation in 2018 that extended the AMBER Alert system to the Navajo Nation and other tribal nations in the United States, a bill known as “Ashlynne’s Law.” Later that same year, Crotty wore the scarf when she testified for three hours before the U.S. Senate Committee on Indian Affairs about the epidemic of violence against Indigenous women, men, children and transgender people, issues that are compounded by underfunded tribal law enforcement services. And a lack of solid data collection makes it difficult to assess the full extent of the problem.

Recent federal legislation such as Savanna’s Act, which became law last year, seeks to address those issues, but Crotty acknowledged on Wednesday that local, on-the-ground efforts such as the program developed by UNHS are equally important.

“I always say, ‘We shouldn’t be this busy,’” said Tonya Grass, a UNHS victim advocate for the Monument Valley area. “We’re busy like we live in the inner cities.”

Grass and her colleagues Lynn Bia, Danialle Whitehat and Jessica Holiday were the recipients of the FBI’s Community Leadership Award for their work to overcome the challenges advocates face in a rural area where addressing crime can be complicated by the overlapping jurisdiction of county, state, federal and tribal law enforcement. 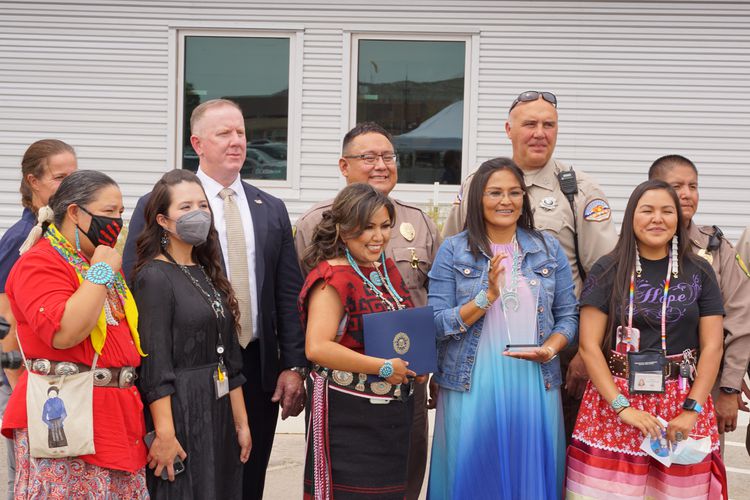 “A lot of these victims, they get discouraged,” Grass, who is working on a master’s degree in criminal justice, said. “They get bounced around from agency to agency, and they have to figure things out. That’s what we’re here for [as victim advocates]. It’s very complex, and I’m glad that service is here so we can let everybody know how it works.”

Bia, who was hired as UNHS’ first victim advocate in 2014, covered the entire southern portion of San Juan County from Aneth to Navajo Mountain when she started, and she said it took years to build the program into what it is today.

“There were no resources here,” Bia said. “I had to Google stuff. I had to go by common sense, and I started slowly working to build up our resources.”

Many of the advocates noted law enforcement needs to play a key role, which requires improving coordination between the county sheriff, the Navajo Nation’s police force and the FBI. Bia said she considered becoming a police officer with the Navajo Nation when she saw the local needs but decided instead to continue with her current role.

At the ceremony, Navajo Nation Council Delegate Nathaniel Brown called on the FBI to send more resources to the Navajo Nation.

“We need more visibility from the FBI,” Brown said. “We need more prosecution of these individuals who are committing these heinous crimes.”

Crotty sees the UNHS model as one example of how to effectively engage on the issue. “For many generations, these systems were not built for the benefit of our people,” she said. “And that’s what I see [changing] here in Utah. [UNHS’ program] is community based. The community has a role in the governing body.”

Inspired by the success of the program, Crotty, who chairs the Navajo Nation’s Naabik’íyáti’ Sexual Assault Prevention Subcommittee, helped UNHS become a designee to receive grants that will fund similar programs in northwest New Mexico and northern Arizona.

“Hopefully in the next five years, we’re going to have something similar all over the Navajo Nation,” Grass, the victim advocate, said.

New shelter to open in Blanding

Currently when a family needs help, Bia or one of her colleagues will have to drive them to a shelter hours away in Flagstaff, Ariz., Grand Junction, Colo., or Price, Utah.

But that too is set to change. Navajo Nation Vice President Myron Lizer oversaw the ribbon cutting ceremony for the renovated Gentle Ironhawk Shelter in Blanding Wednesday, which is equipped to house up to thirty county residents. 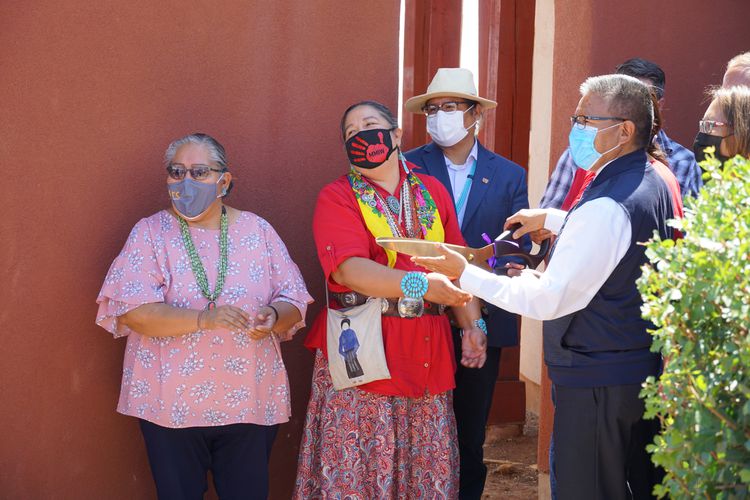 The shelter was purchased by the Navajo Nation in 2018, and it will be staffed by UNHS with support from other nonprofits and organizations.

The UNHS program is “very unique,” said Gary Scheller, director of the Utah Office for Victims of Crime, at the ribbon cutting ceremony.

“Most of our programs,” he said, “operate out of police departments, prosecutors offices or nonprofit domestic violence or rape crisis center. This was the only one that we’re aware of that operates out of a health care system … but it makes far more sense because this is about healing.”

Over the last 20 years, UNHS has expanded its services beyond narrowly defined medical and dental care, expanding its staff from 20 around the turn of the millennium to its more than 400 current employees. The health care system is the largest employer in San Juan County.

Although the bulk of UNHS’ work is focused on the Navajo Nation, the shelter is located outside the reservation and will be open to all residents of the region regardless of tribal affiliation. Last year, San Juan County Attorney Kendall Laws warned the San Juan School District board about a “developing culture of rape” among area students, particularly at the majority-white high schools in Blanding and Monticello. In January, The Salt Lake Tribune reported on multiple cases of serial sex abuse in the county and efforts to bring more resources to victims. 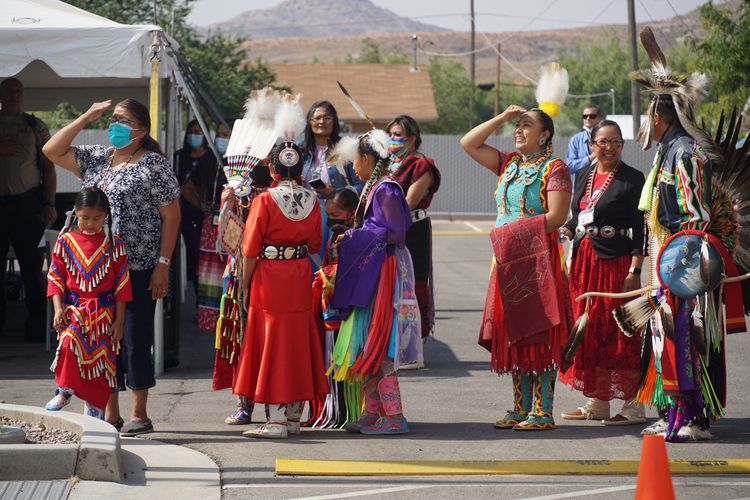 As Crotty was wrapping up her speech in Montezuma Creek, she once again returned to her grandmother’s scarf.

“It’s for all the grandmas here that just pour your love into your children,” she said, “I’m a product of that. I would hug onto my grandma’s skirt and I could smell woodsmoke. That was my safest place. And so I wear her scarves with all of these colors to honor Ashlynne and the beauty of our children, but also the strength of our grandparents.”

“We’re no longer not going to tell our story,” she said. “We’re going to create these healing spaces.”

Zak Podmore is a Report for America corps member and writes about conflict and change in San Juan County for The Salt Lake Tribune. Your donation to match our RFA grant helps keep him writing stories like this one; please consider making a tax-deductible gift of any amount today by clicking here.