It has been a busy couple of months for our movement! A lot of positive developments have taken place across the country and SNAP Leaders and advocates have been busy at work with partner organizations and allies in government to advance our cause of justice and prevention.

Just last week, New Jersey became the latest state to reform their statute of limitations laws and provide survivors with a “window to justice.” The new statute will extend the civil SOL to age 55, or seven years after the victims discover the connection of their emotional and psychological harm to their sexual abuse. It also opens a two year 'window to justice' to allow those previously barred by the state's extremely restricted SOL to take action. We are grateful to everyone who had a hand in pushing this much needed reform in New Jersey, especially local leader Mark Crawford whose advocacy was critical to this law’s passage. Congratulations Mark, and thank you for your efforts to improve access to justice for all.

This reform comes on the heels of the passage of similar legislation in New York in February and Montana earlier this May. Reform is also being considered in Pennsylvania, California, and Arizona. California also has pending legislation to remove the clergy-penitent exception to mandatory reporting law. These are encouraging signs that legislatures are wakening to the realities of sexual violence and the barriers that survivors face. Now it’s time to press our advantage! If your state has pending legislation on the table, we urge you to write to your representatives and encourage them to support it. If you need more information about the bills, please let us know. If your state has still not moved forward on reform, write to your representatives and ask them to sponsor such legislation. If you need some inspiration, a sample letter with basic talking points about SOL reform can be found here.

New Investigations in Georgia and California; Let's Keep the Pressure Up!

As legislatures nationwide are taking action to combat future cases of clergy abuse, so are attorneys general. In April, New Jersey AG Gurbir Grewal’s probe into clergy abuse resulted in its first guilty plea. Then, in early May, California AG Xavier Becerra announced that he was formally requesting all California dioceses to preserve documents related to their handling of clergy abuse allegations and will look into how dioceses in his state respond to allegations. The archdioceses of San Francisco and Los Angeles, along with the dioceses of San Jose, Sacramento, Fresno and Orange County, were reportedly asked to voluntarily submit their documents to the attorney general’s office in the next 30 days

Since AG Josh Shapiro released his bombshell grand jury report last August, 18 other states and the U.S. Attorney’s office in Washington D.C. are investigating clergy abuse, most recently Georgia. Let’s get that number to 50! Take just a few seconds out of your day to send a letter to your state AG, urging them to open a confidential reporting hotline and email address for survivors in your state. Truth, transparency, and vigilance will prevent future cases of abuse, so tell your AG to get the ball moving in your state today. Check out sample letters that can help with your outreach here. 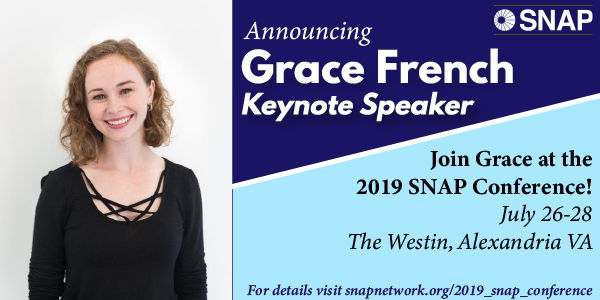 We are only two months away from the 2019 SNAP Conference, held from July 26-28 at The Westin in Alexandria, VA! If you have not yet registered, make sure to register today before registration prices go up at the end of May. And while you’re at it, don’t forget to book your room at The Westin with our special, discounted rate.

So far we have announced keynote speakers Marci Hamilton and Siobhan O’Connor. Today we’re excited to introduce you to another of this year’s speakers,Grace French, the President of THE ARMY OF SURVIVORS. Grace is a change agent and advocate who is working with her team to bring awareness, accountability, and transparency regarding the sexual violence against athletes at all levels.

Grace will speak about her experiences as a survivor of campus abuse and what she and her “Army” are working on in order to prevent future cases of abuse and help change the culture in the U.S. that allows sexual abuse to thrive. You won’t want to miss this talk from a dynamic advocate! Register for the conference today.

Video-Conferencing Support Groups are in full-swing!

If you are interested in participating in one of these support groups, please contact the group leader for meeting information.

And we are always interested in expanding our video conferencing options to better support rural survivors, survivors from specific communities, or even just as a way to kick-start support groups in existing areas! If you are interested in learning more about these groups or starting one of your own, please get in touch with us.

SNAP Leaders in the News

Remember, the FBI is actively interested in hearing from survivors of clergy abuse who meet the below criteria:

If you or someone you know matches these criteria, please either contact the FBI at (215) 521-3647 or get in touch with us and we will forward your complaint to our FBI contact for you (note: we have forwarded many complaints on to the FBI if you contacted us previously about this.)

Thank you for being a part of our movement!