The Diocese of Kansas City/St. Joseph broke the state’s mandated reporting law last month. And they want the parents, children, and parishioners of St. Patrick Catholic Church to keep quiet about it.

The painful tenure of convicted child pornographer Shawn Ratigan was a tragic blow to the parish. Now, parents have learned that a long-time volunteer has repeatedly violated boundaries with children. He violated boundaries so often during his 20-years at the school, in fact, that he was put on a “safety plan,” according to a letter sent to parents by the pastor of St. Patrick’s parish in December.

The man banned from the parish even admitted to a reporter yesterday that he acts inappropriately with children.

But that was not enough for church staff to call law enforcement. They decided to handle it internally.

In Missouri, ministers are mandatory reporters of child abuse and neglect. According to the state reporting requirement, any minister who believes a child may have been subjected to abuse is required to report. In addition, “No internal investigation shall be initiated until such a report has been made.” (Link to Missouri Guide for Mandated Reporting: https://dss.mo.gov/cd/pdf/guidelines_can_reports.pdf)

What is even more appalling about the actions of church officials is that pastor Fr. Robert H. Stewart asked parents to keep quiet and refrain from “gossip or speculation.” Reporting suspected sexual abuse is not gossip. Protecting children is not speculation.

We encourage local law enforcement to engage in a robust investigation of this case and all others like it. We fear there may be victims of abuse at this parish.

We ask anyone at St. Patrick’s who wants to stand up to this bullying and child endangerment to contact SNAP. We want to help. If you see or suspect abuse, report to law enforcement. If you are being abused or have been abused, report the crime and get help. It is safe.

(SNAP, the Survivors Network of those Abused by Priests, is the world’s oldest and largest support group for victims of sexual abuse in institutional settings. SNAP was founded in 1988 and has more than 20,000 members. Despite the word “priest” in our title, we have members who were molested in all institutional settings, including churches, schools, clubs, and homes. Our website is SNAPnetwork.org) 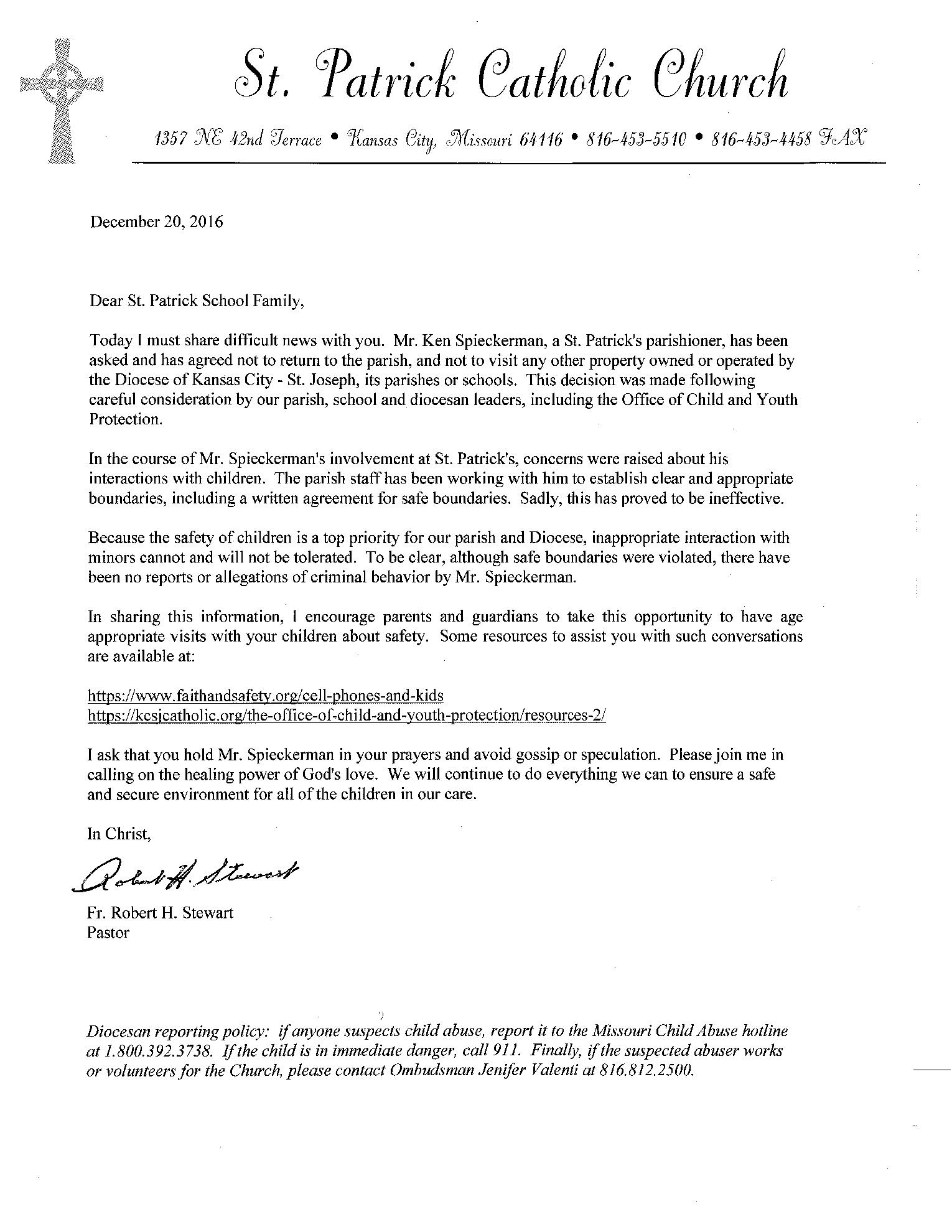