In Memory of a Giant: A Eulogy for Fr. Gary Hayes

Our movement is filled with brave, eloquent survivors who have uttered lines at news conferences that fill me with pride and amazement. One of them is Fr. Gary Hayes. Or I should say “was.” Gary has passed away. 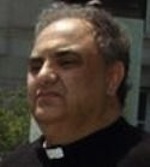 He was the first priest to have been molested by a priest to file a lawsuit and hold a news conference. One of the proudest moments of my life came in the early 1990s. Along with Steve Rubino, I had the honor of helping Gary organize the event. I stood next to him, and his mom, when he issued an opening line that still brings goosebumps to my skin today when I recall it:

“I am here seeking justice in the courts because I could find no justice in my church,” Gary said before a crowded hotel conference room and a dozen or more reporters in Philadelphia.

Fr. John Bambrick, another SNAP pioneer and priest who was abused by a priest, sent us this email:

“Gary Hayes, a SNAP pioneer and former president of Link-Up died this week after a long battle with cancer.  Gary was one of 50 survivors who testified at Dallas in 2002 and was instrumental in the changes that occurred.  He was a true heroic figure in our movement.

Gary will be waked at DeMarco-Luisi Funeral Home 2755 S. Lincoln Ave in Vineland, NJ on Wednesday April 10, 2019 from 6pm to8pm.  There will be a service at 7:30pm.  Cremation will be private and burial in the family plot at a later date.

In lieu of flowers the family asks that donations be made to Survivors Network of those Abused by Priests in Gary's memory.”

In the early days of our movement, Catholic officials played “divide and conquer.” They’d toss a bone to Link UP, hoping they’d undercut or criticize or distance themselves from SNAP, the group perceived to be the more unreasonable by the bishops. To his credit, Gary never took the bait or played this game. He was the ultimate ‘priest of integrity.’

It’s hard to say what was bigger: Gary’s heart, his laugh or his commitment to justice.

In San Francisco, I attended my first SNAP meeting. It was well along in the program before I finally stopped pacing the sidewalk outside the hotel and found the strength to step inside. Barbara Blaine had divided us up by gender. I sat in a very small circle with Joe Johnson of Minnesota, Eddie Morris of Philadelphia and Gary. It was an absolute watershed in my personal recovery and again, I feel chills when I think of the incredible honesty and bravery in that little gathering.

May we all show the grace and courage and steadfastness Gary showed in his all-too-short life.