Michael Roberts comes from a religious Catholic family that never missed Sunday mass. And like hundreds of other boys who have come forward, he was abused by the priest at his church.

But Roberts’ story of abuse by Catholic priests is a little different from others. He was a little older than most victims we’ve heard about; he was 17 when he was first raped. But, Roberts explains, he was a young and naïve 17 with no sexual experience.

The purpose of Roberts’ book, Behind Sacred Walls, is to help other victims of abuse by religious figures, not to expose or punish those who hurt him. In fact, Roberts changes the names of his tormentors and never reveals the parish that protected his rapists.

Father Gregory, as Roberts calls him, began inviting himself to dinner with the family every week. Then he invited Michael on day trips. His parents were delighted that their favorite priest was taking such an interest in their son. They couldn’t imagine he was grooming Michael for years of abuse.

When Roberts at first tried to get Father Gregory to stop, the priest told him, “Your family will never find out.” And rather than distance himself from the family, the priest continued to ingratiate himself to them.
And Roberts thought his family would never believe that this kindly priest, who showed such rage in private, was capable of rape. 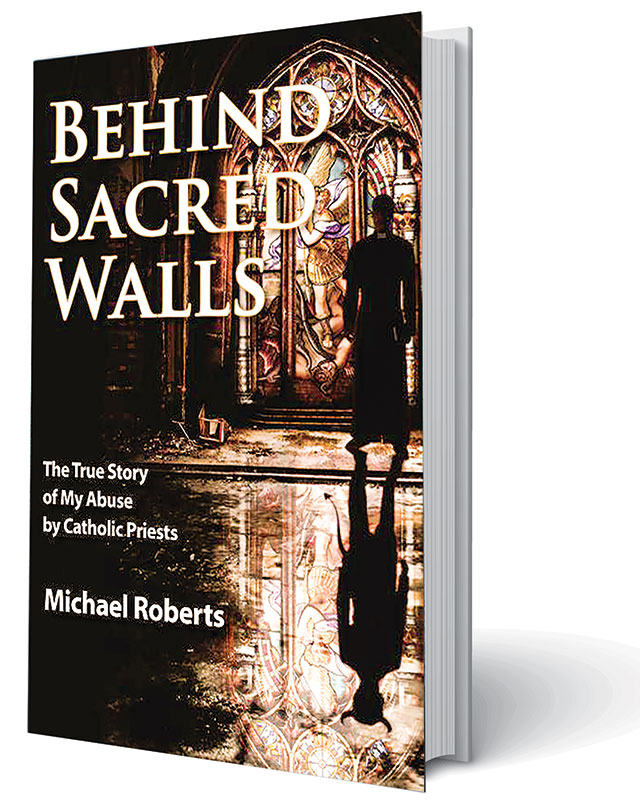 Years later, when charges are actually filed, Gregory was moved from one parish to another. Even once the case reached the Vatican, Gregory wasn’t defrocked. Instead, he was hidden, Roberts said.
And when Roberts finally reported the abuse to the church, another priest who he thought was going to help raped him as well.

Roberts, who eventually escaped his predators, today lives in Massachusetts with his husband. He says that the actual number of victims of abuse by priests isn’t known, although a report in 2019 indicates more than 20,000 victims were known to bishops from 1950 through 2018. Experts believe the actual number of abuse victims is much higher.

Of the 118,184 priests who worked for the church during that 68-year period, 7,002 were accused of abusing children, Roberts reports.

While Roberts reported his abuse much earlier, he said the average age of someone reporting abuse by priests is 52. Many don’t report what happened to them because of shame and guilt.

Rather than being optimistic about ending these assaults by pedophile priests, Roberts gives parents signs to look out for in their children. He says lashing out, irritable moods and depression are common among children who are being abused. Alcohol and drug use are often a reaction to dull the pain. The result may even be suicide.

SNAP — Survivors Network of those Abused by Priests — was founded in 1988 by Barbara Blaine, a woman who endured years of pain, depression and shame after being abused in eighth grade by a priest who taught at her school in Toledo, Ohio. Years later, when she finally reached out to the church for help and justice, the bishop in Toledo refused her pleas. So she began building a network of fellow survivors of abuse by clergy, and today SNAP is the largest, oldest and most active self-help group for clergy sex abuse victims, with more than 25,000 members and support groups meeting in more than 60 cities across the U.S. and the world.

According to SNAP, if you see child sexual abuse, have a reasonable suspicion of sexual abuse or believe your child has been sexually abused, call 911 or the local police immediately. You can also call the National Child Abuse

Hotline at 1-800-4-A-Child or visit the Child Help Hotline, where trained crisis operators staff the lines 24/7 to answer questions, and if necessary, show you how to report in your local area.
For more information, support or other resources, visit SNAPNetwork.org.