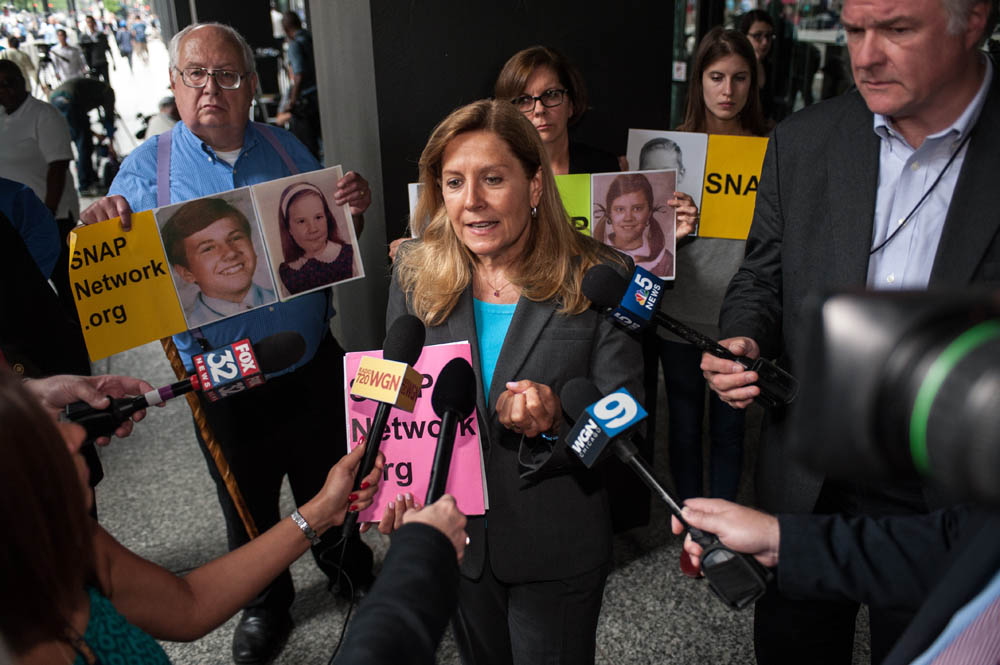 “Few people have done more to protect kids and help victims than Barbara Blaine. Her relentless advocacy enabled millions to eventually accept a long unbelievable reality: that tens of thousands of priests raped and fondled hundreds of thousands of kids while bishops hid these heinous crimes. She started-and for almost 30 years-worked extremely hard to help build the world’s most successful organization of child sex abuse victims. Her contributions to a safer society would be hard to overstate.”

"I had been without a way to check my e-mail for a few months, and just recently read the e-mail that told me that Barbara Blaine died. I was so sorry to hear the news. I didn't have a chance to meet her in person, but I had the chance to speak to her on the phone. I am a supporter who has lived in the US all my life, and I'm not sure if I ever met a survivor before speaking to her and other survivors at SNAP. It's tough to hear the news of a survivor who died, who did manage to be in the spotlight and speak up about sexual abuse. I don't think my own road towards making a difference in regards to ending child abuse is over, but sometimes it feels like it has barely just begun, too. Thank you Barbara, for all that you did to make a positive difference in the world."

"I called SNAP 3 years ago... a woman answered the phone. It was Barbara's voice I heard. It was filled with understanding and compassion as I related my story about being sexually assaulted in 3rd grade by Rev. Fr. Stephen S. Gadomski. https://www.findagrave.com/memorial/83894779. She was concerned that I was doing fine by calling me back to check on me. It was a mother's love. She also counseled me on following up with a police report to the Evanston police. I felt so empowered! Because of my relationship with her I was able to tell my story."

"Barbara was a force of nature!  Her life and sacrifice has given us all the courage to move forward on our journeys."

"As I sit here the for first time watching “Spotlight” (on 10-28-17) and Googling when I read Barbara Blaine had died. The crimes against me were from 1985-1987, aged 11-13. In summer of 1992 I happened to buy an issue of People magazine with a story about James R. Porter and mentioning a Massachusetts man Frank Fitzpatrick who I called and he referred me to Barbara Blaine among others. Barbara‘s work is undoubtably significant as to where we are today."

"I first met Barbara after my Therapist recommended I call SNAP after she saw her on the Oprah Winfrey Show. I met Barbara at a St. Louis conference and here in Orlando when she was vacationing at Disney world. Barbara was an enormous support and Light during some very hard days. She helped me Wade through a heavy Thicket of Corruption and callousness. She was Caring, Insightful, Talented, Generous and Energetic. The Catholic Church missed out on a Rich Soul in their sphere.
Barbara was well behaved, she saw something very wrong and tried to do something about it. In my book, that is exemplary behavior. I am sorry for her abuse, for her heart problem and for her physical absence from all our lives..."
-Eugene Rosenquest, Florida

"Barb's calm was central to my comfort and so recovery efforts in Boston. My warmest to all who knew this remarkable person."

"Broken Rites Australia wish to acknowledge the loss of Barbara Blaine. So many will be affected and will grieve her passing.

Barbara's work for victims of clergy abuse was ongoing and played such an enormous part in exposing the secrecy that concealed the deplorable truth of the sex-abuse scandal within the Catholic Church.

Broken Rites Australia wish to join with our American counterparts to continue to strive, in our own way, to carry on Barbara's quest for justice.

Her lifelong conviction that one more step may make the needed difference should be the motivation for us all."

“What Barbara created was a safe place for all types of survivors to coexist. Those of us who wanted to hang on to their Catholic faith and those, like myself, who wanted to rid themselves completely of all things catholic. We understand each other lovingly and Barbara made that possible.”

Barbara Blaine saved my life when I felt like dying, she gave me her hand and managed to travel to know her. She is a great woman, simple, brave, fierce, intelligent. She is a great role model. My respect for her. - Julieta Añazco

“Godspeed, Barbara...you helped me to understand that it was never my fault. Fly with the Angels <3”

"Heartbroken. Numb, Sad. No words can describe the loss of Barbara's presence on Earth. She has fueled us, those who were and are still able to have their voices heard. I am going to hold on to the belief that she will continue to help from where she is. "Saluta" Barbara - God Bless and Thank you."

"She epitomized courage, personal conviction, loving care for victims, and the virtue of holding those in power accountable."

"I am so incredibly saddened by the news of Barbara’s passing. I know you must be devastated by her death. We have lost an amazing warrior for social justice."

"I’m feel blessed that she touched my life and the lives of thousands of survivors and children. May her spirit continue to impact all those committed to justice."

"My heart breaks for all touched by her death."

"Right now I am speechless. Let’s be grateful for the work this hero did for all survivors."

"We deeply regret the passing of Barbara Blaine."

"Please accept our most heartfelt sympathies for this loss…our thoughts are with you and SNAP during this difficult time."

"We will never forget the work Barbara has done for all of us."

"Was very sad to hear of Barbara Blaine's death."

"I was so saddened to hear of Barbara's death."

"How saddened we were to hear of Barbara's tragic, untimely passing. It is such a tragic loss for the abuse community."

"I'm stunned and very, very sorry to learn that Barbara has died. A wonderful, vibrant, intelligent and committed model for us all. Sending prayers and a big hug."

"This is my memory of Barbara, advocating and smiling. Rest in peace Barbara, knowing we will never forget you or what you accomplished."

"So very sad, what an amazing person she was. A true hero to so many. She helped us all find our voice."

"I remember the time Barbara drove me back to my hotel in downtown Chicago after a leader's meeting which had been held on the outskirts of the city...It was cold and dark and very late and I knew she had to be exhausted after such a long day. Instead of taking me right back to my hotel, she insisted that we drive around Chicago so that I could see the Christmas lights. With all the enthusiasm that is Barbara Blaine, she said "Susan, you've just got to see this." I will always remember that evening and those beautiful lights and I will never forget Barbara. Thank you, Barbara, for helping me see the light(s)."

"She saved the lives of thousands of survivors, including me. She dedicated her life to helping others with courage and compassion. She persevered in the face of obstacles and rejection. She brought hope to the millions of survivors who suffered alone, and in darkness, thinking they were the only one. She provided a message, you are not alone, you can get better, you can fight back. Truly, her efforts changed the world. She organized and mobilized tens of thousands of survivors of clergy sexual abuse, but her efforts supported and propelled other movements in the Boy Scouts, universities, sports teams and other religious organizations in fighting sexual abuse. She had courage to take on the largest institution in the world, the Catholic Church. She took the experiences of child abuse of thousands of survivors to the International Criminal Court and accused the Pope and Cardinals of complicity in their abuse and the cover up of their crimes. She would stand in front churches and name those priests accused of abusing children. She was a fearsome advocate for all of us. Her memory continues in the work of thousands of survivors who are alive today because of her lifelong work. And her advocacy lives in the ongoing work of organizations that fight for survivors, Survivors Network of those Abused by Priests and Bishop Accountability." -Tim Lennon