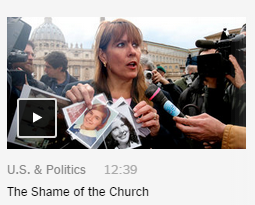 In 1988, Barbara Blaine founded the Survivors Network of those Abused by Priests, the nation’s oldest and largest self-help organization for victims of clergy sexual abuse. The first support group meetings of SNAP were held in a homeless shelter that Blaine ran in south Chicago. Through word of mouth and small ads, SNAP grew into a national outreach, educational and advocacy organization. Today, SNAP has more than 21,000 members.

Blaine was born in Toledo, Ohio, where she was repeatedly molested by a Catholic priest at the parish she attended. Because of the shame and trauma, several years passed before she was able to tell anyone. By that time, it was too late to file criminal or civil charges. Church officials refused to restrict the priest’s access to children or take action against him for several more years, despite other victims coming forward.

The shattering experience directed the course of Blaine’s life. She went on to become a social worker and an attorney who advocates for children’s rights. She earned a bachelor's degree from St. Louis University, a master's degree in social work from Washington University in St. Louis, a master of divinity degree from Catholic Theological Seminary in Chicago and a law degree from DePaul University School of Law.

In 2002, Ms. Magazine chose Blaine as one of its “women of the year” for her work on behalf of clergy sexual abuse victims. In bestowing the award, the magazine noted that Blaine founded her organization “14 years before the issue became a front-page story.” By empowering survivors to tell their stories publicly, Blaine has been a catalyst in lifting the climate of secrecy that enables clergy predators to thrive.

For nearly a decade, Blaine ran a homeless shelter in south Chicago. At the time, she was part of the Catholic Worker movement – a faith-based community in which members live and work among the poor, accepting voluntary poverty themselves. After earning her law degree, Blaine became a public guardian for Cook County, Ill., which includes the city of Chicago. In that role, she advocated for abused and neglected children.

Barbara Blaine is founder and former president of SNAP, Survivors Network of those Abused by Priests. Since 1988, Blaine has reached out to help survivors, expose wrongdoers and prevent clergy sex crimes and cover ups. Previously Blaine worked as a volunteer high school teacher in Jamaica and assisted street-children to locate family members, ran a shelter for homeless families in Chicago and then represented abused and neglected children in juvenile court. Blaine holds graduate degrees in Law, Social Work and Theology. Blaine works tirelessly to protect the innocence and safety of children and to help survivors and their loved-ones find healing, information and support. She is married and lives in Chicago.