We Have Free Tickets Available- First Come-First Serve for "Conspiracy of Silence: The Magdalene Laundries" Available to View Live-Streamed

Powerstories Theatre in Tampa, FL is confronting the often-shrouded, controversial topic of abuse in the Catholic Church in Ireland with CONSPIRACY OF SILENCE: THE MAGDALENE LAUNDRIES.

For twenty-two years, Powerstories has been driven by giving voice to women. Now, more than ever in our history, we refuse to whisper, defying the stigma of talking about abuse in religion. We are honored to debut this vastly unknown story based on Ireland's sordid religious history. CONSPIRACY OF SILENCE: THE MAGDALENE LAUNDRIES is live at the theatre from April 28 to May 15 and live-streamed on April 30, May 7, May 14, and May 15.

We have ten tickets available for the May 7 live stream and the first ten people to SNAP Communication Mgr. Mike McDonnell at [email protected] will receive the e-ticket invite for viewing. 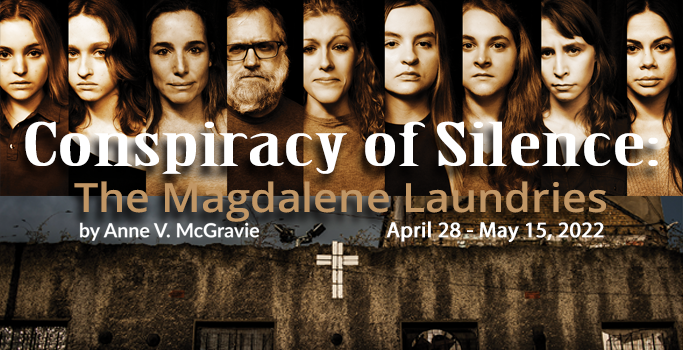 Powerstories Theatre Founder Fran Powers learned about the Magdalene Laundries, also known as the Magdalene Asylums, from a tour guide while visiting Ireland. Named after Mary Magdalene, the laundries were meant to be places of reform and repentance where women could wash away their sins while scrubbing dirty laundry to benefit the Church financially.  Fran assumed the travesties occurred in the Dark Ages and was shocked to find the laundries operated unregulated from the 18th century until they were finally forced to close their doors in 1996. An estimated 30,000 women and girls were confined in these Irish workhouse institutions, many for most of their lives. In 1993, unmarked graves of 155 women were uncovered on the convent grounds of one of the laundries.

We are incredibly excited to share that we have secured the live-stream rights of this important play. No matter where you are in the world, you can enjoy a live performance from the comfort of your home with tickets for just $20. The streaming dates are Saturdays - April 30, May 7, May 14 at 8 PM EST, and Sunday, May 15 at 2 PM EST.

In this premiering play, Rosemary is an unruly sixteen-year-old girl whose strict father fears is soiling the family's good name. She is abandoned at the Irish laundries under the pretense that he is taking her to a "strict" convent school to finish her high-school education. Instead, she finds herself a prisoner, overworked, underfed, and physically and mentally abused by the Magdalene Sisters.

Here is an article about the play.

Please visit the link below if you are interested in seeing this powerful drama.
https://powerstories.ticketleap.com/conspiracy/t/COSVoices/